Eight video teachings from the 2010 Deeper Conference. Topic: “Jesus — Diving into the riches in Christ.” 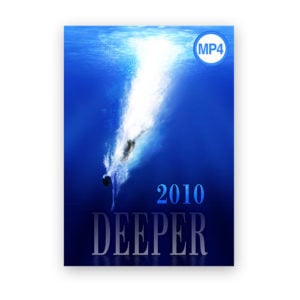 Zeal for the Lost (SD)
View all items

“Dogs, Donkeys, Dreamers, and Jesus.” Message by Ray Comfort. Format: Mp4. Size: 779 MB.
Charles Spurgeon made a powerful comparison between dogs and dreamers. Add donkeys to the mix, and you either have a confusing mess, or you have a powerful sermon that God can use to encourage the body of Christ. Find out which one this will be.

“Zeal for the Lost.” Message by Ray Comfort. Format: Mp4. Size: 626 MB.
Our image of God determines our zeal for His Kingdom. Discover the key to biblical success.

SPEAKER BIO:
Ray Comfort is the co-host (with Kirk Cameron) of the award-winning television program The Way of the Master, which airs in 70 countries around the world. Ray is a best-selling author of more than 70 books. He and his wife, Sue, live in Southern California, where they have three grown children.

“The Incarnation of Christ.” Message by Emeal “E.Z.” Zwayne. Format: Mp4. Size: 800 MB.
“And the Word became flesh and dwelt among us…” God in a manger…clothed in humanity…mingling with sinners. While carefully exploring the theological significance of the God-man’s “hypostatic union,” we’ll delve deep into the life-changing ramifications of this most divine and epic event.

SPEAKER BIO:
Emeal (“E.Z.”) Zwayne is the President of Living Waters. After his radical conversion to Christ in 1991, he enrolled at Biola University as a Biblical Studies and Theology major. Having received his pastoral ordination in 1995, he served for almost 6 years as a full-time Associate Pastor and Vice President of his church’s board. His teachings have extended to people of different age groups throughout America and other parts of the world. He has been the featured speaker at various conferences, churches, and learning institutions. E.Z. resides in Southern California with his wife, Rachel, and their five children.

“Communicating Jesus in a Secular World.” Message by Ken Ham. Format: Mp4. Size: 888 MB.
1 Corinthians 1:23. Comparing Acts 2 and 17 and learning how to present the gospel to the secular (Greek) culture of today.

SPEAKER BIO:
The president/CEO and founder of Answers in Genesis – U.S. and the highly acclaimed Creation Museum, Ken Ham is one of the most in-demand Christian speakers in North America. Ham, a native Australian now residing near Cincinnati, Ohio, is the author of numerous books on the book of Genesis, the accuracy and authority of the Bible, dinosaurs, and the destructive fruits of evolutionary thinking. He appears frequently on American TV and hosts the daily radio program “Answers…with Ken Ham,” heard on more than 800 stations in America (and dozens more overseas). He is also one of the editors and contributing authors for AiG’s Answers magazine (a biblical worldview publication with over 70,000 worldwide subscribers).

“Ultimate Proof.” Message by Dr. Jason Lisle. Format: Mp4. Size: 869 MB.
Our job as Christians is to be able to give a defense of the Christian worldview. In Dr. Lisle’s message, you will be given the information and tools needed to rightly and confidently stand up and give an irrefutable defense, against which no rational argument or comeback can stand.

SPEAKER BIO:
As Director of Research, Dr. Lisle leads Institute for Creation Research’s gifted team of scientists who continue to investigate and demonstrate the evidence for creation. He graduated summa cum laude from Ohio Wesleyan University, where he double-majored in physics and astronomy and minored in mathematics. He earned a master’s degree and a Ph.D. in astrophysics at the University of Colorado. Dr. Lisle specialized in solar astrophysics and has made a number of scientific discoveries regarding the solar photosphere and has contributed to the field of general relativity. Since completion of his research at the University of Colorado, Dr. Lisle began working in full-time apologetics ministry, focusing on the defense of Genesis. Dr. Lisle was instrumental in developing the planetarium at the Creation Museum in Kentucky, writing and directing popular planetarium shows, including “The Created Cosmos.” Dr. Lisle speaks on topics relating to science and the defense of the Christian faith using logic and correct reasoning; he has authored numerous articles and books demonstrating that biblical creation is the only logical possibility for origins.

“Jesus Alone Is Good.” Message by Mark Spence. Format: Mp4. Size: 760 MB.
The skeptic’s objection goes like this: “You Christians say God is good and all-powerful. However, if He was good, He would want to deal with the problem of evil. If He was all-powerful, He would be able to deal with the evil in the world. The problem is evil still exists. Therefore, either the Christian God is too weak to combat evil or He is too sinister to care or, more probable, the Christian God simply does not exist.” We will examine the truth together.

SPEAKER BIO:
Mark Spence is the Dean of Students for the Living Waters’ online School of Biblical Evangelism. He served for a number of years as an assistant pastor in Southern California. He has served as the Head of the Calvary Chapel Bible College and the School of Discipleship in Yorba Linda, CA. Mark is a dynamic communicator and a gifted expositor of God’s Word with a passion to equip Christians for effective personal evangelism for the glory of God. He currently resides in Southern California with his wife, Laura, and their five children.

“Above All.” Message by Pastor Philip De Courcy. Format: Mp4. Size: 938 MB.
This study will focus on the supremacy of Christ over the creation and the church. By virtue of His person and work, Christ is above all powers and owns the first place in human history and hearts. He is ultimate, not penultimate. In a world of competing gods, the church must preach that name which is above every name and show by her life that Christ has the preeminence in all things. Christ is not a point of discussion but the integrating center of all of life. Christianity is Christ, center and circumference.

SPEAKER BIO:
Pastor Philip De Courcy was born in Belfast, Ireland, where he graduated from the Irish Baptist College, taking his first church at Carr Baptist in Country Down. He moved to California fourteen years ago to attend The Master’s Seminary in Sun Valley and became the Pastor of Placerita Baptist Church in Santa Clarita. From there he was led to Immanuel Baptist in Toledo, Ohio. As of October of 2007, Philip De Courcy has moved back to California and taken up the Senior Pastorate at Kindred Community Church. Pastor Philip’s teachings are heard on his daily radio program, Know the Truth.

SPEAKER BIO:
Todd Friel studied to be a pastor for four years but neglected to actually get saved. He abandoned church ministry plans and did secular TV, radio and stand-up comedy for 6 years. Gratefully, God saved Todd (from hell and stand-up comedy). Since then, Todd has combined his pastoral training and media skills to host a daily Christian talk show.

Currently, Todd is host of Wretched, a daily television show and radio program. He has written for Christian Chronicle, Christian Worldview Network, has Debated Dan Barker (Pres. Freedom from Religion Foundation), Eddie Tabash (Council for Secular Humanism) and many others. He has spoken at churches, festivals, seminars and youth groups all over America.

***Please note: At this time we do not support downloads directly to Apple devices (iPad, iPhone, iPod) or most tablets. For those devices, you will need to download to a computer first and then copy the files using iTunes or a similar program.