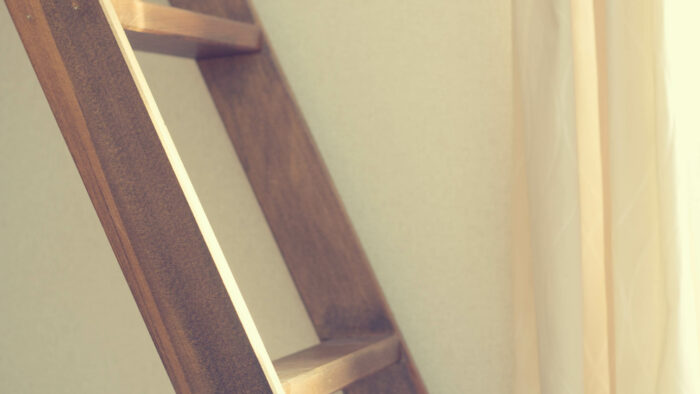 Ray springboards to the gospel by sharing an observation of a law of physics, that every action has an equal and opposite reaction. With this law in mind, Ray tells the personal story of being stuck hanging from a high shelf having lost his ladder underfoot.

I was up a ladder when I was reminded of this law. Eight feet up the ladder. I had to pick up a piece of wood that weighed about 30 pounds. As I pushed the wood to the back of the shelf, this law kicked into action and saw myself and the ladder as one entity.

Suddenly that entity passed through me through the ladder, and the bottom of the ladder kicked out about 12 inches. So I found myself precariously hanging from the shelf about eight-feet in the air above a ladder that was about to fall. I thought, Oh, I could get injured any second!

I learned something about myself. I learned that I’m a very proud person, because I thought, You know, about now I should call out, ‘Help! Somebody help me!’ But I didn’t want to. The reason for that is that my staff would come running in and see me hanging from an eight-foot shelf and think, This looks stupid. What an idiot this guy is.2

So I looked around, and on my right hand, on my right side was a steel cabinet. And I thought, If I reach out from the shelf, I can put my foot on the cabinet to save myself. And that’s what I did.

We will not call out for help if we think we can save ourselves, because we’re proud creatures. And why should we anyway, if we can save ourselves? Now the Bible says, “Whoever calls upon the name of the Lord shall be saved.”3 And if you’ve not called on the name of the Lord it’s because you think you can save yourself. You say, “What do you mean, ‘Save yourself’? What are you talking about?”

You may not realize it, but you are hanging in a very precarious position. When you think about it, you and I are hanging from this life over eternity. Every one of us. And in an instant we can fall through death. In the back of your mind you’re thinking, “Yeah, if that happens…if there’s a God…if there’s a Judgment Day…if there’s a Heaven or Hell, I’ll be fine. My hope is that I’m a good person.”4

That’s how you think you can save yourself.5

What I’d like to do this morning is show you that what you’re hoping in is actually a parachute filled with holes. What you’re doing is extremely dangerous. What I want to do is show you there is no steel shelf or anything for you to put your foot on to save yourself.

So, you are trusting your own righteousness6 to save you on the Day of Judgment—and there’s going to be a Day of Judgment—and you think that you are basically a good person. Let’s see if you are. Let’s look at the Commandments and see God’s standard for morality.7 The first of the Ten Commandments says, “You shall have no other gods before Me.”8 Is God first in your affections? Do you love the God who gave you life? You and I should. He gave us taste buds to enjoy good food. He’s lavished His goodness upon us. We’ve a free land to be in, and enjoy the pleasures of this life—good food and friendships, health, a mind to think with, ears to hear with, eyes to see with. You’re not some person in Africa, part of some famine, lying on the ground with flies crawling cross your face. God has greatly blessed you as a person. So you should love God and put Him first in your affections. Do you do that?

Some of you might say, “I do that. I love God.” Well, let me ask you a question: Have you ever used God’s name in vain?9 You say, “Yeah. Once or twice.” So you’ve taken the name of the God who lavished His goodness upon you, gave you life, and used it as a cussword to express disgust. Folks, that’s called “blasphemy,” when you use God’s name as a cussword.10

Adolf Hitler’s name wasn’t despised enough to use as a cussword, and you’ve taken the name of the God who gave you life, and blasphemed Him—which shows that you don’t love God.11 And the problem is this: You’ve probably created a god to suit yourself. The Bible says there is one God and He is perfect,12 holy,13 and righteous.14 The Bible says He’ll “by no means clear the guilty.”15 What you’ve done is transgressed the Ten Commandments, which say, “You shall not make yourself a graven image.”16 That means you shouldn’t make a god to suit yourself, either with your hands or with your mind.

Come across to the Sixth Commandment.17 It says, “You shall not kill.”18 You say, “Well, I haven’t killed anybody.” The Bible says if you get angry without cause you’re in danger of judgment.19 The Scriptures say, “Whoever hates his brother is a murderer.”20 The Seventh Commandment is, “You shall not commit adultery.”21 Maybe you’ve not committed adultery, but listen to what Jesus said. He said, “But I say to you, whoever looks upon a woman to lust after her has committed adultery already with her in his heart.”22

Have you ever lied or stolen? The Bible says, “No liar will inherit the kingdom of God, no thief…”23 In fact the Bible says, “All liars will have their part in the lake24 of fire.”25 See, if you are trusting in your own goodness to save you, realize you’re not good. You’re like the rest of us. Your conscience is defiled,26 the Bible says. It even says you’ve got an evil conscience.27 What you do when you judge yourself is judge by a standard you don’t even judge other people with.28 That’s because your conscience is dead. You know it’s wrong to lie and steal and lust and blaspheme. So, on the Day of Judgment you’ll be guilty and the Bible says you’ll end up in Hell. That’s not God’s will.

The way He did it was in becoming a human being in Jesus Christ, and giving His life as a sacrifice for the sin of the world. Jesus paid your fine in His life’s blood, so you could leave the courtroom on the Day of Judgment. The Bible says that “God so loved the world that He gave His only begotten Son that whoever believes in Him should not perish but have everlasting life.”30

Folks, God offers you the gift of everlasting life. Please, today come to your senses.31 Repent32 and put your trust in Jesus Christ, and the Bible says you’ll pass from death to life.33 Thank you so much for listening. God bless you.

*This is a transcript of an open-air outreach.

Ray Comfort is the Founder and CEO of Living Waters, a bestselling author, and has written more than 100 books, including, The Evidence Study Bible. He cohosts the award-winning television program Way of the Master, which airs in 190 countries.

Painting with Light
This innovative and interactive street painting was done near the Mission Inn in Riverside, CA. As you’ll see, it was a wonderful and captivating way to share the gospel.
Christianity is for Losers
Being a modern-day open-air preacher in the United States carries a lot of unwanted baggage.
The Gospel Didn’t Make Sense Until He Heard THIS
A masked man at Huntington Beach suddenly understands the gospel when Ray presents it biblically.
© 2022 Living Waters Publications. | Permissions | Privacy | Terms of Use
Back To Top
Search

Thank you for sharing!