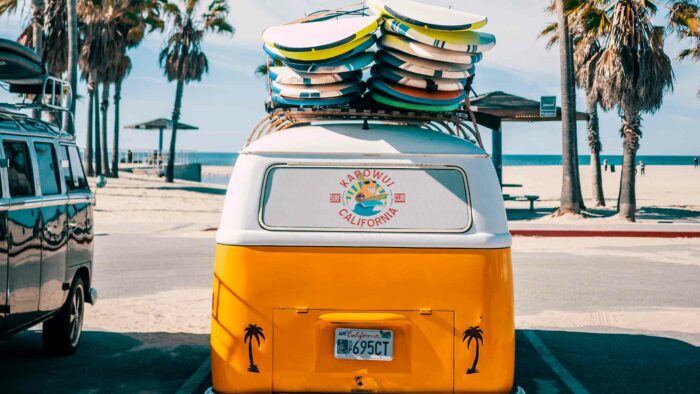 Ray springboards to the gospel by telling a story about speaking with a Korean girl. Ray expected her to speak in broken English, but instead the girl spoke as a typical Californian, saying “like” and “totally” several times.

The other day I spoke to a young Korean girl. She was dressed kind of different and I wrongly surmised that she would speak to me in broken English. She didn’t. She spoke like a typical California Girl. Lots of “likes” and “totallys.” She had to give a testimony in a church. It was a ten-minute testimony. So as an experiment, I’d see how influenced she was by the American culture…by the California culture. I decided I would count the number of times she said the word “like”…you know, like, like like totally.

In ten minutes, she said “like” 81 times, believe it or not. Eighty-one times, like. It really shows that you and I are subconsciously influenced by the culture that surrounds us. We’re influenced by what we say, by what we even eat, by the clothes we wear, how we talk, etc. In fact I could go to a university, I could point out certain people and by the clothes they’re wearing, and I could tell you what music they like, even their life’s philosophy.

The Bible says we’re like sheep.1 Sheep tend to imitate one another. I come from a country that has a lot of sheep. Seventy million sheep, three million people. A lot of sheep. I can tell you, people are like sheep. Sheep tend to imitate one another. One sheep in the line jumps, the next four, five, six will jump. And I know people are like sheep because I give out a lot of Christian literature, and I know from walking along a line, and one person says, “Yeah, I’ll take one,” the next six people say, “Yeah, I’ll have one too.” One person says, “Nah…no, thanks,” and the next six people will say, “No, thanks.” We are like sheep.

The Bible even says we’re like sheep that are prepared for the slaughter.2 I don’t know if you realize this today, but that’s so true. You and I are like sheep waiting to be slaughtered. Now one thing when it comes to sheep, when they want to slaughter them…they have what’s called a “Judas” sheep. Because sheep tend to follow one another and imitate one another, the Judas sheep goes to the top of the ramp and turns to the right…the rest of the sheep go forward and get their throats cut.

I want to show you that you’re like the sheep that go to the slaughter, and what I’m going to do, if I may, is take you through the Ten Commandments and show you what a dangerous state you are in. So, please bear with me.

The First of the Ten Commandments says, “I am the Lord your God; you shall have no other gods before Me.”3 That means, God commands, as your Creator, the giver of life to you, that He be the focal point of your affections. You and I are commanded to love the Lord our God—our Creator—with all our heart, mind, soul, and strength, and to love our neighbor as much as we love ourselves.4 Do you love the God who gave you life? Do you realize the eyes you see with, the brain you think with, the taste buds you eat with, the ears you hear with, come as a gift from God? You didn’t evolve. You were created by the genius of God’s handiwork.

God has blessed you with this abundant land. You’re not lying in some place in Africa on the dirt with flies crawling across your face. God has blessed you beyond your wildest dreams. Do you love God? It’s only right that you do. Before you say yes, let me ask you another question: Have you ever used God’s name in vain? You say, “Ah, yeah, yeah. I say that GD, JC just slips out.” So what you’ve done is taken the name of the God who gave you life and used it as a cussword to express disgust. Adolf Hitler’s name wasn’t despised enough to use as a cussword, but you’ve taken the name of God and used it in blasphemy, which is a terribly serious sin in God’s sight. The Bible says, “The Lord will not hold him guiltless who takes His name in vain.”5 So if you’ve ever used God’s name in vain, then you don’t love God.

You love the god of your own creation, the god that is a figment of your imagination; the god that you’ve created to conform to yourself and your own sins. That’s called idolatry when you make a god with your hands or your mind, and the Bible warns idolaters will not inherit the Kingdom of God.6 The God who gave us life is holy and just and righteous. The Bible says He has “prepared a day in which He will judge the world in righteousness,”7 and the standard with which He’ll judge the world is the Ten Commandments.8 Jesus said, “You’ve heard it said by them of old, ‘You shall not commit adultery,’” but then He said, “But I say to you whoever looks upon a woman to lust after her has committed adultery already with her in his heart.”9 What will you do on the Day of Judgment when you stand before God and He judges you by that standard? Ever lied or stolen? Then you are a lying thief, and the Bible says, “All liars have their part in the lake of fire.”10 No thief will inherit the Kingdom of God. Can you see that you’re waiting as a sheep to the slaughter, and if you die in your sins and God gives you justice, you’ll end up in Hell? Folks, that’s not God’s will. He provided a way for you to be forgiven. And He did it through His Son, Jesus Christ. God became a perfect human being and gave His life on the cross of Calvary, taking the punishment for the sin of the world.

When Jesus was on the cross He was bruised for our iniquities. The Bible says, “For God so loved the world that He gave His only begotten Son that whoever believes in Him should not perish but have everlasting life.”11 Folks, that’s what God offers you today through the gospel: everlasting life. So come to your senses. Do what the Bible says. Repent.12 Turn from your sins and put your trust in the Savior, Jesus Christ. And the moment you do that, you will pass from death into life. You’ll pass from darkness into light. Now Mr. Blower is on his way to blow me away,13 so please think seriously about what you’ve heard today. Get a Bible. Don’t only just pray. Get right with God. Pick up that Bible and obey what you read. The Bible is God’s will for you on this earth. Thank you very much for listening this morning. God bless you.

*This is a transcript of an open-air outreach.

Ray Comfort is the Founder and CEO of Living Waters, a bestselling author, and has written more than 100 books, including, The Evidence Study Bible. He cohosts the award-winning television program Way of the Master, which airs in 190 countries.

Painting with Light
This innovative and interactive street painting was done near the Mission Inn in Riverside, CA. As you’ll see, it was a wonderful and captivating way to share the gospel.
Christianity is for Losers
Being a modern-day open-air preacher in the United States carries a lot of unwanted baggage.
The Gospel Didn’t Make Sense Until He Heard THIS
A masked man at Huntington Beach suddenly understands the gospel when Ray presents it biblically.
© 2022 Living Waters Publications. | Permissions | Privacy | Terms of Use
Back To Top
Search

Thank you for sharing!