These are digital episodes from Season Three of The Way of the Master TV program.

|Collection Way of the Master TV 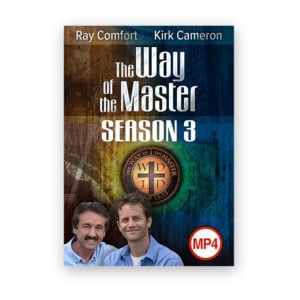 38-Hollywood Be Thy Name 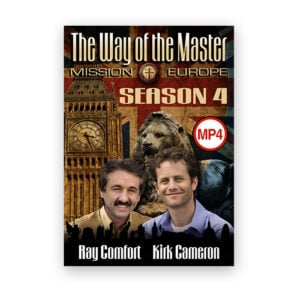 Episode #26: Battle for the Lost
We are at war with a powerful, threefold enemy. But God has given us even more powerful weapons that can ensure victory for every soldier of Christ. Do you know what they are? “Battle for the Lost” will tell you and then climax with a wonderful, clear revelation of what God did for us at the Cross of Calvary. If you get a grip of this revelation, you will never again be powerless against the pleasures of sin or the glitter of this sinful world.

Episode #27: Where Has the Passion Gone?
There is nothing more important than to reach out to the unsaved. But this is something the Church won’t do if it doesn’t have a burning passion to see them safe in Christ. Having an all-consuming zeal for the lost should be the testimony of every Christian, but sadly few who profess to be in the contemporary Body of Christ have enough concern to make evangelism their obsession. “Where Has the Passion Gone?” will help to make God’s passion a reality in your own life.

Episode #28: Joe Average
Joe is a typical man. He doesn’t think much about the incredible creation that surrounds him, let alone the unspeakably incredible Creator who created him. Even though God gave him life, if you asked Joe if God had ever done anything for him, he probably couldn’t think of one thing. Each sunrise just reveals another average day for Joe Average. Well…not quite. There is nothing “average” about Joe or what he does each day. You will be delighted and encouraged by “Joe Average,” because he will make you see everything in a miraculous new light.

Episode #29: Caught in a Lie
Lying is usually a defense mechanism that we use to get ourselves off the hook. Sometimes we can tell when a person is lying, but other times it may not be so easy. “Caught in a Lie” will reveal why a “lie detector” doesn’t really detect lies. You will discover what happened when actor Kirk Cameron tried to fool a polygraph machine. Why did his heart rate and blood pressure suddenly increase when he answered certain questions? “Caught in a Lie” will also show you that there have been two reliable witnesses to every crime of this world. Do you know what they are?

Episode #30: The Divine Butler
America has been a land flowing “with milk and honey.” It has been rich, with an abundance of food, wealth, and prosperity. But in recent years, something has changed. We have been plagued with hundreds of killer tornadoes, terrifying hurricanes, massive foods and droughts, and an onslaught of cancer. Each year in the U.S. there are more than 189,000 new cases of prostate cancer and 203,000 cases of breast cancer. Over 2.3 million Americans will get cancer in the next year, many of whom will be children. Why are these tragedies happening in this nation? “The Divine Butler” will give you an insightful and thought-provoking perspective.

Episode #31: Why Christianity?
Imagine if you were offered a choice of four gifts: The original Mona Lisa, the keys to a brand new Lamborghini, ten million dollars in cash, or a parachute. Which would you choose? If you have ever asked what happens after we die, if there is a Heaven, or how good we have to be to go there, “Why Christianity?” will help you. If you have ever wondered which religion you should choose, if any, “Why Christianity?” will sort through the confusion so that you can make the best choice. Take the time to watch this carefully-there’s nothing more important than where you will spend eternity.

Episode #32: Jehovah’s Witnesses
The Jehovah’s Witnesses are best known for going door-to-door. You have probably seen them in your area, and more than likely they have knocked on your door. They recently spent over 1.2 billion hours in one year proclaiming the “good news of Jehovah and His Kingdom”. What do they believe, and more important, how can you effectively reach them with the truth? This episode will tell you what to say.

Episode #33: Mormonism
Who are the Mormons? They seem to be such moral, loving, family-oriented people. How did the Mormon church get started? What do they believe? Are they Christian or are they a cult? They say they believe the Bible, but what about the Book of Mormon, the golden tablets, and Heavenly Father and his wives living on their own planet? Will we become gods ruling our own planets? Did we all pre-exist before being born on this earth? Is Jesus really Lucifer’s brother . . . and what about being “baptized for the dead”? You will be amazed at what Mormons believe.

Episode #34: Are you a Genius?
Many people, attempting to show atheism to be “intellectual,” have claimed that Albert Einstein was an atheist. However, the brilliant scientist said the exact opposite. He said, “In the view of such harmony in the cosmos which I, with my limited human mind, am able to recognize, there are yet people who say there is no God. But what makes me really angry is that they quote me for support of such views.” Are you a Genius? Maybe you’re no Einstein, but do you consider yourself to be an intelligent person? “Are You a Genius?” will ask you seven fascinating questions that will help you to see how intelligent you really are.

Episode #35: Last Words of the Rich and Famous
We live in a beautiful world of breathtaking beauty, with clear blue skies, puffy clouds, an endless array of beautiful flowers, lush green grass, and magnificent tall trees. It truly is a wonderful world, made by a wonderful and loving God. But think about killer earthquakes, massive floods, terrifying hurricanes, fearful tornadoes, disease and death, and ask why a loving God would create these things. If you have ever wondered why there is so much suffering in this world, you will greatly appreciate “Last Words of the Rich and Famous.”

Episode #36: How to Find God’s Will
Have you ever wondered what God wants you to do with your life? That’s the ultimate question for the Christian. “How to Find God’s Will” clearly shows you that you can know what He wants you to do. We have only one chance at this unspeakably precious life, and if we miss God’s will, everything else we do is futile.

Episode #37: What Scares You?
What do you fear in life? What really scares you? Is it guns, or heights? Or maybe you are simply afraid of dying? Is it creepy spiders or venomous snakes? “What Scares You?” reveals that a venomous snake is hanging onto the hand of the Body of Christ, pouring in its venom of fear to paralyze you. That’s a fear none of us want. But did you know that there is another fear? It’s a fear that we can’t afford not to have . . .

Episode #38: Hollywood Be Thy Name
In the beginning Hollywood said, “Let there be light,” and there was light. And there were cameras. And the spirit of Hollywood moved across the face of the earth. Hollywood created. It picked up unknowns from the soil of humanity and breathed into them the life of celebrity-a golden image, whose sole purpose was to bring in big money at the box office. But something went terribly wrong. In 1968 a serpent appeared in the garden. Movies became filled with blasphemy, adultery, and violence. The bright light that once was became a gross darkness, and Hollywood began to suffer the ultimate delusion of grandeur. Enthroning itself as God, it began to spout blasphemy against the heavens and became a law to itself. Hollywood answered to no one-not even God. So it believed.